Today, we have Anna D. Allen here on the blog, sharing a humorous historical tidbit with us!

My sister’s into the Restoration period, when Charles II returned to Britain after decades of Puritan rule. Not my cup of tea. Can’t get past the wigs. Plus the Stuarts never seem like the brightest crayons in the box. But my sister loves it, and since I know all the characters, she jabbers to me about it. One story she told me lay dormant in the back of my mind for years… until last winter, I felt compelled to write a romance novella inspired by a footnote to history.

Arabella Churchill was the sister of John Churchill (later the Duke of Marlborough). John was a national war hero, the builder of Blenheim Palace (frequently used in movies), and most famous today as the ancestor of Sir Winston Churchill and Princess Diana.

At court, Arabella served as a lady-in-waiting to Anne Hyde, the king’s sister-in-law, whose husband, James Duke of York, would go on to become King James I–infamously losing his crown in the Glorious Revolution.

Arabella, however, was not a beauty. She was tall and skinny, very pale, and openly called plain.

At this point, the accounts vary. Either everyone went hunting on horseback or James took it upon himself to teach Arabella to ride. In any event, Arabella was thrown from her horse. When James reached her, he discovered her skirts in disarray, leaving her legs completely exposed. And he was shocked that such a plain girl could possess such incredible limbs. He, supposedly, fell in love with her on the spot, and she soon became his mistress, eventually giving birth to four of his children.

I couldn’t resist a bit of thievery… but set in the Regency Period. With snow. And a really hot hero. The result: Magdalena’s Christmas Rake.

The kiss! I always end up writing the last kiss I wrote. So I have to go back and makes sure I don’t do that. And then there’s my inner 5-year-old going "ooh, cooties" or pulling a Rainman– "It was wet."

Have you ever based a character on a real person?

Several times. The best one, though, was Bob in "Mrs Hewitt’s Barbeque." The man was a greeter at the local Meijer’s (think Super-Walmart in the Mid-West). He was in his 60s, from Northern England with the corresponding accent, but he looked like the Crocodile Hunter, down to his khaki shorts. And he had a short queue and an earing. I had to write him.

I love Regency romance, but a trope? My sister jokes that I like stories with "a plot." I laughed when she said this, but I knew what she meant– those tales with smugglers or French spies. I like soldiers. I like heroines who are "older"– that is, not debutantes with little experience of the world. Variations of Cinderella– but always always always, intelligent women. And intelligent men, too. 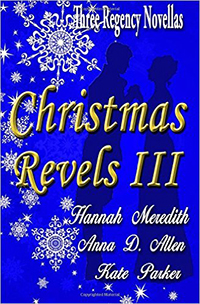 When days turn dark, Christmas brightens the way… Come Revel with us again!
Magdalena’s Christmas Rake – Thomas Eddington comes home for a family Christmas to discover his mother in a matchmaking mood. Worse, she has invited his childhood nemesis, "Mad Maddie" Winslow, to act as chaperone to the eligible debutantes. For her part, Magdalena Winslow hopes to go unnoticed. She certainly wants nothing to do with a London rake, and she’s not afraid to let him know it.

Not including Mr. Darcy, who among Jane Austen’s male characters would you want as a husband? Or whatever works for you.