MEET THE HERO: Duke of Colehaven 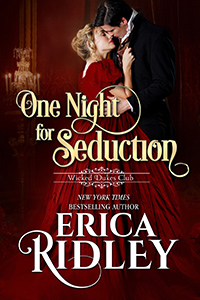 Enjoy an excerpt from the newest Wicked Dukes Club romance,
One Night for Seduction!

Movement caught the Duke of Colehaven’s eye and he turned to see a maid slip into the drawing room. Possibly sent to offer him some sort of refreshment as he waited for the lady of the house to make an appearance but, given how the mission was unfolding thus far, more likely the girl was simply going about her normal routine. The butler would return at any moment to inform Cole his mistress had no wish to make his acquaintance.

He gave a subtle nod to acknowledge the maid’s presence and moved out of her way to sit upon the edge of a sofa.

The maid tilted her head as if considering him, but the brim of her mobcap flopped too low for Cole to discern the direction of her gaze. Of course a servant wouldn’t be so ill-trained as to stare rudely at her masters’ guests. Likely she was deciding between carrying on with her duties or returning later once the unexpected guest had gone.

“You’re one of Diana’s friends?” came the soft query.

Cole wasn’t certain what startled him more: confirmation that Diana Middleton did indeed have friends, or surprise that a maid would dare to address him directly.

Perhaps that was why his mouth answered automatically, “I’m here to see Miss Middleton, yes.”

Even that small evasion caused a ripple of discomfort beneath his skin. It was none of the maid’s business what the Duke of Colehaven was or was not up to, but Cole prided himself on being scrupulously honest in all his dealings, regardless of situation or class. Yet he could not bring himself to say No, I am not her friend aloud. Honesty was paramount, but so was honor, and he was not here to besmirch Miss Middleton’s.

“Is she expecting you?” the maid asked.

“She is not,” he replied tightly, and made a show of arranging his long limbs in the opposite direction as though he had become struck with sudden fascination at the wallpaper on the other side of the parlor.

There. That should put paid to further inquiries.

“Then why are you here?” the maid insisted. “Have you come to press a suit?”

“Nothing like that,” Cole blurted out more forcefully than he intended. He gave up on the far wallpaper and turned to glare at the impertinent maid in the doorway.

She was no longer in the doorway. The maid now stood an arm’s width from the other side of the sofa. Her enormous mobcap still flopped too low for her eyes to be visible, but her slender fingers worried at each other against the starched panel of her apron.

The chit ought to be worried. If one of the Middletons caught her interrogating a guest… Or if the head housekeeper should spy her underling shirking her duty…

“Haven’t you anything to do?” Cole said at last. He was not rude by nature, but then again, he normally did not find himself in conversation with other peoples’ chambermaids. Reminding her of her duty was doing her a favor, he told himself. If she lost her post due to such antics, Cole would not be to blame.

“Where’s your chaperone?” the maid asked.

“I don’t require a chaperone. It’s Miss Middleton who—” He broke off as a sudden thought occurred to him, unlikely as it might seem. “Are you the young lady’s chaperone? Have you come to assess my character?”

“Did you hope for a stolen moment alone with her?” the maid countered.

“Heaven forbid.” He could not repress a shiver of horror. “I would never be caught alone with a marriageable young lady.”

“None,” he replied firmly. And definitely no wish to be compromised against his will.

“Then what makes you think Miss Middleton has any intention to marry?”

“Of course she intends to marry,” Cole said in exasperation. “All proper young ladies hope to find a worthy husband and become an equally worthy wife. What else is she going to do?”

“Mathematics,” the maid replied without hesitation.

He blinked at this non sequitur. “What sort of woman prefers mathematics to marriage?”

“A wise one,” the maid snapped. She ripped off her mobcap and glared at him, revealing a beautiful pair of angry blue eyes. “I’d rather devote the rest of my life to applied sums and long division than spend a single second in the presence of yet another man who thinks he knows what a woman wants without bothering to perform the most perfunctory of information gathering interviews to determine—”

“Miss Middleton?” stammered from his mouth, but Cole need not await verbal confirmation to recognize the truth. “Why are you dressed like a maid?”

“Why are you alone with me in this parlor?” she countered, hands on her hips.

At this unfortunate moment, Cole noticed that when the “maid” entered the salon, she’d shut the door behind her. His stomach bottomed in abject fear. If she hadn’t known he was coming, why on earth was she wearing a disguise? Had she known he was coming?

“Please tell me this was not an elaborate trick to compromise me into marriage,” he managed, every muscle tensing in anticipation of the worst.

“No,” Miss Middleton said, blue eyes flashing, “it is leverage which I intend to use to force you to leave me alone.”

“You mean to extort a duke?” He paused as full realization set in. “Into not marrying you?”

“Is it working?” she demanded.

He rose to his feet with alacrity. “I harbor no wish to marry you. None. At all.”

“Splendid,” she said. “Now hear this. I don’t need you or any man. Understood? If you’ve any sense of self-preservation, you’ll find your way out of this town house before someone catches us alone together and both our lives are ruined.”

God help them both.

He dashed to the door and flung it open wide, to prove no nefarious seduction was underway in the guest parlor. But Miss Middleton was right. Lack of misdeed would not be enough. He needed to make haste before the distinct lack of chaperonage in the parlor forced them into an unwanted marriage.

Sensing any act of politeness would only serve to irritate her further, Cole tipped his hat as he swept past her. “Pleasure to make your acquaintance, Miss Middleton. Have a lovely day.”

“I’m already delighted never to have to see you again,” she called after him, her plump lips pursed in victory.

He smiled to himself as he slipped on his gloves.

That was where the fiery Miss Middleton went wrong. They would definitely be seeing each other again. After all, he had a ten-year winning streak to protect.

And the Duke of Colehaven never backed down from a dare.