As you may or may not know, I own the world’s most extensive variety of sticky notes. They help me story board! Which has saved me tons of time, hassle, and heartache.

The first story I wrote was using the I-have-no-clue-what-I’m-doing, no-pre-planning, just-write-and-see-if-it-sucks method. Turns out, it sucked. I then found a CP and some colored index cards and made it suck less, but meh.

The second story I wrote, I had the brilliant idea to do the colored index card thing first. This was a help. Sort of. But I over-plotted it and wrote to my index cards instead of the story, and so once again, I had a sucky manuscript.

The third story, I wrote in I think a caffiene-induced haze because I went from They Met to The End in a little over a month and then forgot the whole thing for almost a year. We’ll come back to that one.

For the fourth story, I used a story board. (And the fifth, but let’s stop here.)

Why bother pre-planning anything?

Well, this is the eternal debate. Being neither a true plotter nor a true pantser (I am a plantser) I am certainly not here to change anybody’s method if what they’ve got going on is working for them.

But just in case it isn’t–or in case you’re the tiniest bit curious about mine–here goes.

I have discovered, through trial and error, that if I over-plot a book, it either comes out mechanical and wrong, or I lose the incentive to write it at all. I have further discovered that if I don’t do the slightest bit of pre-planning or brainstorming in advance, what spews forth from my fingers is an unholy mess.

For me, I need to at least know a lil sumthin about my characters in advance, as well as 1) how the story starts, 2) how the story ends, and 3) at least the first major turning point. From there, I can begin, and move forward. Sometimes with all the TPs mapped out in advance, and sometimes just plotting ahead to the next TP, brainstorming as I go.

What makes a storyboard better than index cards?

(Again, eye of the beholder, so if you lurve index cards, please don’t shank me with a machete.)

For me, index cards were great because I could shuffle them around, reordering scenes, etc. But they had a huge failing, which was that I could neither see nor read them all at one time.

A storyboard easily fits in your frame of vision. You can tell at a glance what is going on, and where. The sticky-notes let you move things around just as easily as index cards.

How do you make a storyboard?

However you want! I’ve done it three different ways.

When I started Love, Lust & Pixie Dust, I made a storyboard that looked a little something like this: 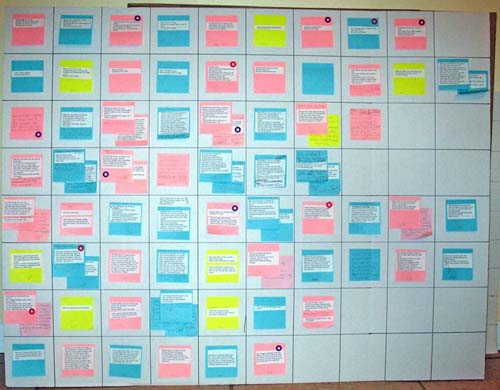 The squares symbolize individual scenes. The different colors represented different POV, and the text was stuff I’d brainstormed that could happen (some ended up making its way into the story, some didn’t. Sometimes I diverged widely and needed whole new sticky notes. This is fine.)

Sent it off to my agent, got an edit-memo (and a better quality board). 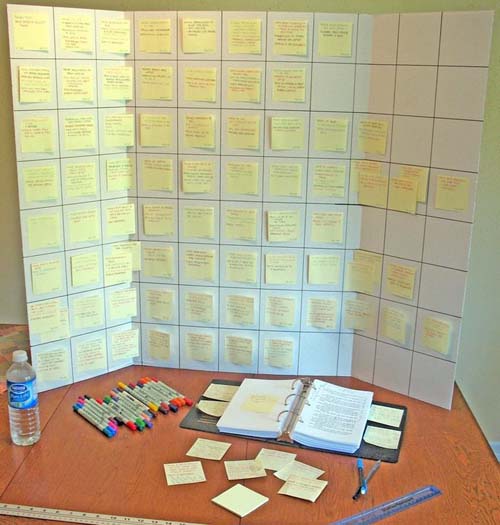 Re-read the story, re-did the story board. Squares still = scenes, but this time instead of different colored backgrounds for sticky notes, I wrote on basic yellow squares in different colored markers, with a unique marker color for each major plot thread.

Once everything was in tip-top shape: scenes added/revised/deleted/moved, everything polished, I made a final story board: 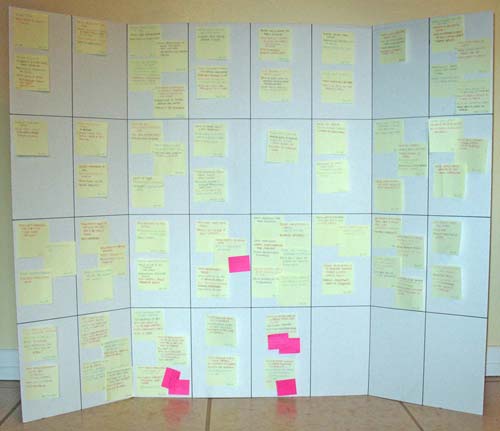 This time, squares=chapters. (I divide into chapters last, because I don’t know until I’m done how long each scene will be, where it will be, or whether it stays or goes, so there’s no sense wasting a bunch of time futzing with renumbering chapters.) (Pink = notes to self.)

Yes. Okay. So, back to that third story that vomited from my brain to my PC, never to be looked at again. When I heard it finaled in the 2007 TARA Contest, I decided maybe it didn’t suck as bad as I remembered, and I should maybe polish it up and send it off to my agent for a second opinion.

Once I’d decided to do more revising than polishing, I knew I needed a story board.

I’d loved the different colored post its I’d tried at first, because I could literally tell at a glance what was going on, even without being close enough to read the actual text.

Having all the subplots listed for each scene was hugely helpful in polishing Love, Lust & Pixie Dust, but when I polished that story, I knew pretty much everything was going to stay where it was, so there was no sense making an overabundance of sticky notes. With Too Wicked To Kiss, I was not so confident, and wanted to be able to rearrange at will. 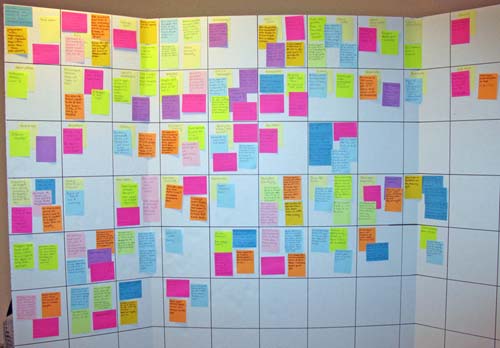 Each square is a scene (you guessed that, right?) and the color of each sticky note corresponds with either a particular plot thread (ie lime=”Murder investigation”) or character (ie light pink=heroine’s view on lurve/hero) or other detail I didn’t want to lose track of (ie manila yellow in the top left corner = scene location/setting).

I can move things around as necessary, and trust me, it’s been necessary.

In the very act of putting my thoughts on the board in their color-coded glory, I was able to see plot holes, missed opportunities, situations where X incident would have more punch either earlier or later, sections where I completely forgot about this thread or dwelled far too much on that thread, etc.

In other words, hugely helpful. I was able to pre-revise, before I’d actually spent weeks rewriting myself into a corner and discovering I needed to start over yet again.