Erica’s In-Home Office
This is where the magic takes place. When it’s not taking place somewhere else. (Assuming there is magic. Sometimes it’s more like bloodletting.)
How does Erica come up with her ideas? And how do these ideas look, before they look like books?

Storyboard for Too Wicked To Kiss

Erica came up with this premise in July 2007 at the Romance Writers of America National Conference, when she heard Colleen Gleason describe her debut novel as “Buffy the Vampire Slayer in Regency England.” Although Erica loves Colleen’s books, writing about vampires wasn’t her Thing (and besides, Colleen was already doing it.) Stephen King-style paranormal was what Erica considered more her alley, considering she’d read every one of the man’s books from the time she could first pick one up, and she began to ask herself what if her Regency England had a Dead Zone twist? Only instead of the hero being plagued by visions (as in King’s story) it would be the heroine. And instead of high society London for a backdrop (as in Colleen’s novels) it would be a single house party in the middle of the country. And because what if is so addictive, Erica decided to make it a murder mystery, too… with a gothic hero as the prime suspect.

Storyboard for Too Sinful To Deny

Having had so much fun with the concept of modern-movie-meets-Regency-England, this time Erica decided to take a spin with The Sixth Sense. Her bespectacled socialite heroine, a prominent secondary character from Too Wicked To Kiss, has a near-death experience (well, technically she does die, if only for a few minutes) and winds up with the unfortunate ability to see dead people. And just because Erica likes to be different, this time the gothic romance is set on a barely-populated coastal town plagued by pirates… one of which happens to be the hero. Who is out to avenge a murder. If he doesn’t get hung for treason first. (Not that that would stop the heroine from “seeing” him, but it’s just not the same.) 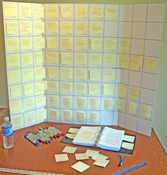 This story, originally titled Trevor and the Tooth Fairy, was borne in response to a blog contest run by the now-retired but much-loved anonymous literary agent Miss Snark. (Full scoop: HERE) Erica was toying with the oft-quoted maxim known as “the fireman and the arsonist” meant for maximizing story conflict by pitting the hero and heroine against each other. Erica, of course, wanted an unusual heroine. She decided on the tooth fairy. Make that aspiring tooth fairy. But who was the natural enemy of the tooth fairy? A dentist? A toothpaste chemist? Bor-ing. How about a paleontologist who falls asleep on someone else’s tooth, which he desperately needs for research if he wants to keep his job. No way is he handing that sucker over. But if he doesn’t, the would-be tooth fairy will lose her job, and her only chance to earn her wings.