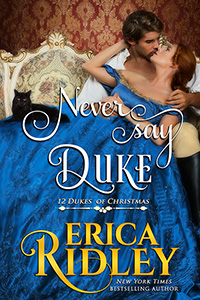 After depositing the chick back into its nest, Virginia dropped down from the tree and brushed the debris from her gloves and person as best she could.

Her bonnet had gone askew and her freshly pressed coat was wrinkled, but what did it matter? Christmas was the furthest haven in England from the disapproving glares of beau monde grand dames and other such exacting personages. Just like her cat, here Virginia was free to be as Virginia-like as she pleased.

Unlike her cat, Virginia had not suddenly disappeared.

He did not respond.

“Duke,” she called a little louder.

She sent a suspicious glance up the tree. No sign of Duke there, either. Nor did his paw-prints lead in this direction.

In fact, it appeared as though he had set off in the direction of… the Duke of Azureford’s cottage. Every one of the wide glass windows were inexplicably cranked open, despite the falling snow and winter chill.

She dashed across the street. Little paw-prints in the snow led past the appropriately closed front door to just below the sill of a ridiculously gaping window. There the trail stopped.

The naughty beast had invited himself inside.

With a sigh, Virginia presented herself at the main door. At least the cottage belonged to a friend. She smiled at the butler. “My cat slipped through the window. May I fetch him?”

Swinton ushered her inside and shut the door behind her. “May I take your coat and bonnet?”

“I shall only be a moment.” She hurried forward in search of her cat.

Duke was not in either of the front parlors, which were the only rooms Virginia had spent time in on previous occasions. Nor was Duke in the kitchen or the larder, to Virginia’s great relief. The dining room was also intact.

She headed toward the living quarters at the rear of the cottage, grateful Azureford was not present to witness this gross trespass of his home.

“Duke,” she called into each open doorway she passed. “Duke, please come out.”

Not that she could blame him for running off when opportunity had presented itself. It was one of the reasons they shared such a kinship. Virginia had often wished she could dive into someone else’s life, too.

“Duke…” She nudged open a cracked door and came to a full stop.

There, perched high atop a wardrobe with his dark shoulders hunched low and his furry hips wriggling high, Duke prepared to pounce.

Just below, seated in a stiff, wheeled chair beside a four-poster bed, sat a man cloaked half in bandages and half in shadow.

His face snapped toward hers. “Get out.”

She stepped closer. “I’ve come for my cat.”

“I don’t have your cat,” the man growled.

“He who does not look, knows not what he possesses.” She rushed forward to place herself between the innocent bystander and her mischievous cat before Duke could cause the poor man more harm than he’d obviously suffered.

He flinched at her sudden movement, then gave an almost simultaneous wince, as if the mere act of flinching had caused him extraordinary pain.

Virginia’s heart twisted. She might not be competent at reading expressions or subtle social cues but wincing and flinching were behaviors she very much recognized. Every single one of her wounded strays had begun just so before they healed.

“Don’t take another step,” the man ordered, his harsh voice little more than a cold rasp.

Normally, Virginia did her best to follow all explicitly spoken directives.

If anything, she often wished everyone could state their desires plainly, instead of expecting the crease of a brow or the position of a painted fan to convey what actual words could communicate so much more effectively.

“Don’t move,” she whispered. “I’ll do my best to block the attack, but he is very good at being a cat.”

The bandaged man went completely immobile. It was as if he was cloaked not just in dappled shadow and strips of cloth but encased in a thick layer of ice. His long black lashes did not blink. His wide lips did not grimace. Not even a twitch on the visible half of his chiseled face.

With effort, she tore her gaze from his soft black hair and rigid muscles and spun to glare at the fluffy predator atop the wardrobe.

She held out her arms. “Come here, right now.”

Ignoring her, Duke lowered his haunches and bared his teeth.

He gave a loud hiss, retracted his claws, and launched himself into her arms.

She cuddled him to her chest. “You naughty scamp. Please leave nice gentlemen alone. You could have hurt…” She turned toward the bandaged man. “What was your name?”

“I didn’t give it.” His voice was as frigid as the wind outside.

Virginia liked the cold. She sat on the edge of a wingback chair, careful to keep Duke trapped in her arms. “I apologize for my cat’s behavior. I didn’t mean for him to stalk you. He slipped away while I was climbing a tree and…”

She clamped her teeth together. Short explanations. That was one of the rules. One cannot say the wrong thing when one says nothing at all. That had been the very first rule. She was breaking them both.

The man stared at her. No smile, no frown. No mockery. He was a mystery.

She gazed back in interest. If he was this handsome half-hidden in bandages, he must be absolutely stunning when fully unveiled. She gave Duke an extra scratch behind the ears. Coming here had been an excellent choice.