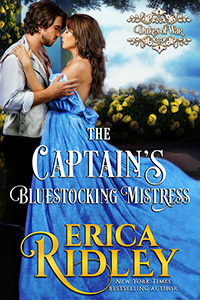 In this scene, Jane discovers that her friends have inadvertently invited the object of her most wanton desires—a dashing, mysterious, ex-soldier who doesn’t even know her name—to join them in their private opera box at the Theatre Royal…

Her entire body was blushing, just at the sound of his name. And the reminder of the rather lurid thoughts she had about him every time she closed her eyes.

She couldn’t move a muscle. Heaven help her, she could barely even think. This was a disaster.

The last thing this evening needed was the object of her fantasies to sit right beside her and remain unaware of her existence. She’d rather return home now, before complete and utter humiliation had a chance to rear its ugly head.

“How do you know he’s coming?” she asked breathlessly.

“Because he said so.” Lord Carlisle lifted his wife’s fingers to his lips. “I told him it would please Grace if he would join us at least once before removing to Essex.”

Grace nodded. “Tomorrow. He has a little cottage a couple miles past Chelmsford and he plans to stay there the rest of the Season.”

“Or perhaps forever.” Carlisle’s jaw tightened. “Xavier thinks he may never be ready for Polite Society. He may be right.”

Jane swallowed hard. Of course the dark and dangerous man of her dreams planned to disappear from Society forever after tonight. What did she expect?

The curtain to the private box flung open. There, silhouetted by the chandeliers in the corridor, stood the infamous Captain Grey… and a very imperious usher.

A wry smile quirked the corner of Captain Grey’s lips. “I’m afraid my good man here couldn’t quite credit that I was welcome in the Duke of Ravenwood’s box. Shall I go?”

Lord Carlisle sprang to his feet. “Of course you’re welcome! Come, sit. I believe you know everyone present?” He turned toward the usher. “We’re all very pleased our dear friend was able to join us. That will be all.”

“I’m so sorry, my lord,” the red-faced usher spluttered. “He looked— I thought—”

“It’s forgotten. Go.” Lord Carlisle dismissed the usher, then turned to Jane. His voice lowered. “Do you mind moving down a seat so Xavier can sit next to me?”

“No, I don’t mind.” Jane scrambled out of the way and waved a hand toward her vacated seat. “Please. Sit next to your friend.”

He inclined his head and took his seat.

The lighting was too dim to make out the crystalline blue of his eyes or the long black lashes that framed them. But Jane didn’t need lighting to recall every angle of his chiseled features or the careless tumble of wavy black hair against the stark white of his cravat. Every inch of him was seared into her memory.

Well, every properly (but disappointingly) clothed inch, that was. Nothing could hide the strong thighs encased in buckskin breeches or the thickly muscled arms filling out the sleeves of his expertly tailored jacket.

Heaven help her. She was going to be a hairsbreadth away from this gorgeous man for the next three hours. She absolutely, positively couldn’t swoon. Or throw herself into his arms. His thick, powerful arms.

Her breath caught. This was impossible. He’d been seated next to her for less than five seconds and already her heart thundered as though she were running for her life. Perhaps she should be. Captain Grey wasn’t good for one’s reputation… or one’s heart.

Everyone knew that. He’d returned from war in a fugue state, and even before that, he hadn’t been considered a catch. Not by Society. He wasn’t rich. He wasn’t heir to a coronet. And he’d always had the same air of danger and unpredictability that clung to him even now.

He appeared confident, graceful, and deadly. No wonder the usher had hesitated. Captain Grey moved more like a hunter than a gentleman. Those piercing blue eyes could freeze a duke right in his tracks.

Or a bluestocking spinster.

She lowered her lashes. There was no way she was going to be able to pay any attention to this opera. She was too aware of his intoxicating proximity, of the rise and fall of his chest, of the way his eyes… were looking right at her? Her leg started bouncing with nerves. He’d caught her staring. She slid a little lower in her chair.

Whatever color she’d flushed before was nowhere near the crimson she must be blushing now.

He hunched closer, so that his shoulder was touching hers. “Any idea what they’re warbling about on stage?”

Oh, lord. She had no idea how her heart wasn’t exploding right out of her chest. His shoulder. Was touching hers. On purpose.

“Er…” Her mind went blank. Captain Grey was actually talking to her. And expecting a reply. Think. What play was this? She forced her gaze to the dueling sopranos. “That’s… Ismene and Antigona. They’re vexed that Creon won’t bury Polynices because he started a war.”

His eyes widened. “You speak Italian?”

She shook her head. “Greek. Antigone was a play before it was an opera. I must’ve read it a hundred times.”

She let her words trail off. Stop. Talking. One must not admit to reading ancient Greek plays hundreds of times. Bluestockings do not leave a coquettish impression. One must strive to be enchanting and irresistible.

Her well-read mind failed to summon any actionable ideas.

His lips quirked. “I haven’t read a book in years, so I suppose I ought to pay attention while the plot is being dramatized right in front of me.” He turned his gaze back to the stage.

There. Jane tried not to crawl under her seat and die. This was what happened when she showed her excessive love for reading. Nothing. Nothing at all happened. That was exactly why she was so forgettable.

Yet she could think of nothing compelling to say, or alluring to do. She couldn’t believe she’d already lost his attention after having had it for such a brief moment. She was so… Jane.

Would it have been better to say she’d only read Antigone once? Or to claim she had no idea why those people were dancing about the stage with swords and lots of sobbing? Perhaps the wisest course would’ve been to—

His shoulder. She stopped breathing. His shoulder was still touching hers. He had remained hunched down as if, any minute now, they might once again be whispering like bosom friends.

She shivered. If only!

It wasn’t just that he was the most exquisitely attractive man she’d ever laid eyes upon. He was a soldier and a hero. An officer. Military men were loyal, and heroic and strong and delicious.

Do not over-think, she admonished herself. Proximity meant nothing. It was just a play. Just a shoulder. He wasn’t going to whisk her into the shadows for a carnal interlude (not that she would have objected) and he certainly wasn’t in any danger of losing his mind and proposing marriage. He planned on disappearing from Society altogether.

But first, she was going to have to spend an evening shoulder-to-shoulder with the one person she would never be able to get out of her mind.