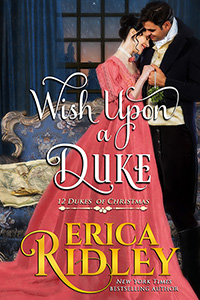 Enjoy an excerpt from the newest Twelve Dukes of Christmas romance,
Wish Upon a Duke!

“This way, please.” Miss Gloria Godwin ushered this month’s crop of stargazers away from the light spilling from the castle’s front doors.

This evening, only a dozen individuals braved the crisp winter weather in search of stars. The few Gloria did not recognize were tourists. Each time she took a new group, she hoped the future love of her life would be among them.

Cupid hadn’t struck yet, but surely it was just a matter of time.

“Shall we wait another moment in case there are latecomers?” Gloria glanced over her shoulder at the castle entrance and forgot whatever else she’d been about to say.

The dashing Mr. Christopher Pringle was standing at the open doors, bathed in light from the crystal chandeliers just inside. She had almost had a chance to meet him two weeks ago, during a party at the castle to celebrate her friend’s latest perfume.

Instead, she’d remained a wallflower. There had been no one to properly introduce them. All she could do was admire him from afar.

And, oh, was there plenty to admire.

Her pulse skipped. Was he coming on her tour? Would she finally get to meet him?

Until a fortnight ago, all she knew about Christopher Pringle was hearsay and a too-brief listing in Debrett’s Peerage. His elder brother was London’s most infamous rake and heir presumptive to a dukedom, making the younger Mr. Pringle second in line to their cousin’s title.

Like his rakish brother, he spent his Seasons in London and was every bit as mind-meltingly handsome in the flesh. There the similarities ended.

While his brother’s infamy was due to countless seductions in Society boudoirs, Christopher Pringle was far more mysterious. His name never graced scandal columns, and his antics—whatever they might be—had not once been immortalized in a penny caricature.

Gloria’s heart stopped. He was looking right at her.

She forced her suddenly frozen features into a welcoming smile.

He didn’t smile back.

She added an encouraging wave of her fingers. A friendly little come-on-over, the-stars-are-fine. And an even wider smile.

His expression did not change.

He didn’t see her, she realized in mortification. He was staring right at her, but his mind was on something more interesting, his thoughts a thousand miles away.

“Miss Godwin?” one of the tourists asked hesitantly.

Gloria’s cheeks flushed with heat. Heaven help her. The group had caught her gawking at one of the castle guests as though he were a celestial being she’d just discovered.