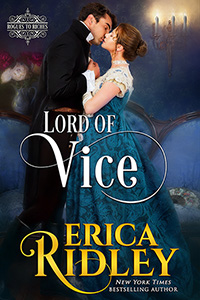 Disguised in lad’s clothing, Miss Bryony Grenville circled around to the rear of the Cloven Hoof and place her ear to the door.

She slid her key into the lock and twisted. The door unlocked with ease. She held her breath as she opened the door.

The coast was clear.

Ever since she’d become the Cloven Hoof’s anonymous investor, she’d studied the plans for the property, and could likely find her way about in the dark.

Nonetheless, she welcomed the moonlight streaking through a few high windows. It was impractical to bring a lit candle on a carriage ride, and she was glad to discover she could see—if dimly. She was standing at the rear of the long corridor that bisected the club’s interior.

She inched forward with caution.

The infamous Maxwell Gideon’s office was to her left, a supply room to the right. Once she cleared these, she came to a small area with chairs and tables on either side. According to her monthly reports, this area was designated for conversation, not gambling. After this section was the primary salon, which contained a bar, dozens of gaming tables in a large open area, and a handful of smaller tables for spectators along the edges.

This last bit, she had to trust more to her research than her eyes. Very little light snuck into the front salon, likely to protect the gamblers’ privacy from passers-by on the street outside.

A tenseness she hadn’t been willing to acknowledge disappeared from her shoulders.

No one was here.

With a sigh of relief, she turned her back on the gaming tables and retraced her steps to the rear office.

She’d known the club would be empty. Past trends had indicated this was the safest of all moments to attempt a reconnaissance mission. All the same, she was relieved to be proven right.

After all, she well knew her disguise wouldn’t pass muster in direct light, or if forced to hold a lengthy conversation. It was simply for getting about in the shadows. A protective shield from the night.

A lad alone never received so much as a second glance. A lady alone received far more than mere glances.

Bryony far preferred being the lad.

She unlocked the office door. Despite the utter blackness within, she locked the door tight behind her as soon as she stepped inside.

Although the plans of the building failed to indicate the location of candles and sconces, logic dictated that there must be one near the door for those entering or exiting the office. She retrieved the tinderbox from her pocket and struck the flint to the metal.

There. Quickly, she lit a taper and lifted the candle from its holder. She stared about her in wonder. This was the black heart of the ton’s most infamous den of iniquity?

A stately mahogany desk not dissimilar from her father’s stood just opposite. A decidedly non-devilish bookshelf covered the wall behind it. Then three comfortable chairs, one behind the desk and two in front for visitors. On the wall facing the alley, a small fireplace. Parallel to the other wall, a comfortable looking settee and an ornate folding curtain, presumably to hide a chamber pot from view.

Also absent from view: coal, brimstone, hellhounds, loose women, or gambling accoutrements of any type. Indeed, she could spy neither a decanter for port nor a tobacco pouch or snuffbox. Not even a token bit of clutter.

From this vantage point, one might be forgiven for believing that the Lord of Vice indulged in no vices whatsoever.

She edged closer to the pristine desk. Not only wasn’t a single paper out of place, there were no documents to rifle through at all. The desk was completely bare. She settled into Mr. Gideon’s chair and tried to imagine where he might hide secret information he didn’t wish for his landlord to see.

The desk drawer? Too obvious. But she jiggled the handle anyway.

“Locked,” she muttered under her breath.

Of course it was. Even if the drawer was empty, a man this slavishly organized would leave nothing to chance.

She let go of the drawer handle. Her keys only worked on doors, and forcing the drawer open would only leave proof of her presence. That was the last thing she needed.

Besides, who hid sensitive documents right where a spy would look for them? He was more likely to… carve a secret compartment inside a book.

She leapt to her feet and moved to inspect the bookshelf.

The idea of the powerful owner of an infamous vice den voluntarily reading female philosophies was so delightful that at first the distant voices down the corridor failed to register as anything more than background noise.

She leapt behind the folding screen just as strong footsteps reached the other side of the office door. Frantic, she blew out the candle and squeezed herself as tightly into the corner as possible.

As long as neither Mr. Gideon nor his guest peeked behind the screen, Bryony should be safe here in the shadows.

But if anyone did…