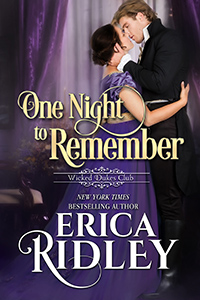 Enjoy an excerpt from the newest Wicked Dukes Club romance,
One Night to Remember!

“I’m here to inspect the curricle,” Giles Langford informed the Duke of Colehaven’s stable boys. “Do you mind if I get started?”

“The c-curricle?” asked one of the boys. “Not the coach?”

“The curricle,” Giles assured him, and pointed. “That one.”

Yet the wide-eyed stable boys remained positioned between him and the ducal carriages, as if they weren’t certain whether to beg for the Curricle King’s autograph or bar him from entry.

Of the two outcomes, the latter would be the most surprising. This was not Giles’s first visit. He could see the deuced curricle from here and had been summoned to work on it. What the devil was the problem?

“It’ll only be a moment,” he promised the stable boys. “I’ll just have a quick once-over, to gauge whether the vehicle requires more than a routine safety inspection.”

A harrumph sounded from elsewhere in the mews.

Giles glanced about in surprise, but saw no one other than the stable boys. He frowned. The strange sound must have been a gust of wind playing tricks.

He took a step in the direction of the duke’s curricle.

All three stable boys immediately fell behind him, like ducklings paddling after their mother.

“Did you do it?” the closest stable boy asked breathlessly. “Did you truly reach the finish line before Mr. Wiltchurch even made it halfway down Rotten Row?”

Giles tamped down a satisfied smile. One did not gloat over one’s racing wins, even if the losing party referred to him a “nothing more than a bloody blacksmith” or “a self-important peasant.”

“I did indeed,” Giles acknowledged as he strode to the duke’s curricle. “Is Mr. Wiltchurch who His Grace will be racing?”

The lads nodded in unison.

His chest lightened. Good. Colehaven and his curricle were more than a match for a rash know-it-all like Wiltchurch. Giles pulled a wrench from his leather satchel and began to check each bolt’s tightness.

The stable boys kept right on his heels.

Giles didn’t mind. He had once been a green lad just like them, eager to soak up experience and wisdom. Dreaming of someday having a carriage of his own.

The maintenance on the duke’s conveyances was second to none. In all the inspections Giles had performed in this carriage house, he had never once come across a loose axle or a missing bolt or an ill-seating spring or so much as a speck of rust. Every vehicle was always in impeccable condition.

Today was no exception. The duke’s racing curricle was in such immaculate shape, one could be forgiven for believing it had been serviced by a master craftsman moments before Giles walked through the door.

Nonetheless, he went through all the safety points in his mental list, skipping nothing. Not a day went by without a dozen accidents clogging up the already congested streets. Safety was a coach smith’s top priority.

“See this coupling?” he asked the boys as he ducked beneath to show them. “The reason we always check this one…”

The lads followed excitedly, peppering his explanations with questions and exclamations. Before long, he and the stable boys had hunched and crawled their way to the opposite side of the curricle.

Giles slipped his tools back into his leather satchel and turned toward the enthusiastic lads. “Next, let’s turn our focus to the wheels, in order to have an in-depth look at—”

He blinked and looked again.

Dainty boots. A hint of lace. And two lovely ankles. Tucked beneath a stately coach. Barely visible behind the trio of stable boys. Almost as if they’d placed themselves in just the right position to block the coach’s undercarriage from view.

Giles spun to face the lads. “There is a woman in your carriage house.”

“No,” the first boy said without hesitation. “Absolutely not.”

The others shook their heads just as firmly. “No women here.”

“There is.” As foolish as he felt saying so, Giles could not refute the evidence before his eyes. Ladies’ half-boots, feminine ankles, lace trim attached to what appeared to be delicate pantalettes. It did not require a Bow Street inspector to put these clues together. He pointed between their shoulders. “Look there! A woman is hiding beneath the duke’s primary coach.”

The lads glanced at each other before shaking their heads with even more fervor. “No females allowed here, sir.”

Giles frowned. If the lads were hiding her presence, then she must not be supposed to be there. Which meant what? Twelve-year-old stable boys were colluding with some madwoman bent on… theft? Sabotage? Not on Giles’s watch.

“Then what the devil is she doing beneath the carriage?” He pushed past the lads and dropped to his haunches beside the coach.

From this angle, he could not glimpse her face.

“Come out of there,” he ordered.

She did not move.

Giles narrowed his eyes over his shoulder at the three white-faced lads. “If the Duke of Colehaven finds out you’ve allowed a stranger to infiltrate his carriage house…”

All three boys blushed in unison.

“Not a stranger,” spluttered one.

“He already knows,” blurted another.

“Oh, for the love of…” With a breathtakingly unladylike muttered curse, the owner of the shapely ankles and lacy pantalettes wriggled out from beneath the Duke of Colehaven’s family coach.

Striking dark eyes glared out at him from a beautiful heart-shaped face. Silky coils of dark brown hair dipped from a crooked, oil-stained mobcap. Her well-tailored dress might have been the equal of any day gown belonging to the Quality…were it not for its horrifically frayed hems, unpatched holes, and impressive collection of enough grease stains to hide whatever had once been the fabric’s intended pattern.

One dusty hand clutched the neck of a worn leather satchel not unlike Giles’s own. In her other ungloved hand was a large iron wrench.

From the expression on her face, she was as prepared to wield it as a weapon as she was to use it as a tool.

Had he thought her presence mysterious before? She was now a full-blown enigma.

“Who are you?” he breathed.