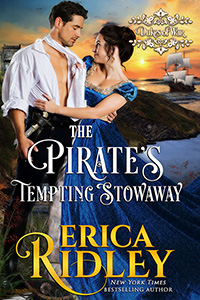 Captain Blackheart’s fingers clenched. Depending on Mrs. Halton’s condition, he might not be able to complete this mission. But the least he could do was deliver the lady’s mail.

He tied his horse to the rusting iron post at the edge of Mrs. Halton’s overgrown front walk and rolled back his shoulders. For the next few minutes at least, he would not be Captain Blackheart, second-most feared pirate upon the high seas. Instead, he would be Mr. Gregory Steele. Again.

It had been so long since he’d last removed his mask, he’d nearly forgotten what being plain Mr. Steele felt like. It was so easy to forget that “Blackheart” was a persona and Gregory Steele was the real man. Especially when he liked being a pirate so much better.

He rapped his fingers against the door.

He glanced around for a knocker. There was none. He rapped harder. Thunder rumbled overhead.

His stomach twisted. He couldn’t help but note the very Steele dismay at the idea of arriving too late to save a total stranger. A pirate like Blackheart would only care that he and his men had been effectively swindled by the earl who’d set them upon this impossible mission.

Gregory Steele, however, would deal with Carlisle and the crew later. First, he needed to determine whether his quarry was still alive—and figure out what to do next.

“Mrs. Halton?” he called, tramping across overgrown grass to squint through a grimy window. “Are you in there?”

“Go away!” returned a muffled female voice from the other side of the wall.

Steele’s shoulders loosened. Relief rushed through him even though he well knew Mrs. Halton’s non-dead state didn’t mean any of their lives were about to get easier. One step at a time.

“Mrs. Halton, my name is Mr. Gregory Steele, and I have come all the way from London, England to—”

A grin played at the edges of Steele’s lips. Pirate or not, he did love a good gunfight. Any old woman cantankerous enough to suggest one was well on her way to being a kindred spirit.

“Well, I’m not here to kill you. I’ve consumption, which is almost always fatal. I shan’t be giving it to you.”

Almost always. Steele’s smile faded and he considered the closed door with renewed respect. If the occupant was aware of the minuscule chance that she might not die, she was also probably aware that temporary exposure to an invalid did not necessarily—or even usually—result in the infection of the caretaker. And yet Mrs. Halton still valued a stranger’s life over any concern for her own.

“You’re not going to shoot me,” he said calmly.

Her voice didn’t sound grandmotherly. But then, they were on opposite sides of a wall. He needed to put paid to this farce. She would realize soon enough that even real weapons were no deterrent. Her empty threats were laughable.

“If you wished for me to die, you’d have no objection to me entering a sick chamber.”

“Perhaps I simply wish for you to die quickly,” came the cheeky response.

He blinked and then bit back a silent laugh. How long had it been since last he’d been threatened to his face? Years. Not since becoming Blackheart. No one had dared to challenge him. Until today.

“I’m busy adding extra powder to my pistol to make certain the first ball takes you down if you come near my door.”

“Most pistols only have one ball, Mrs. Halton. If you miss, you won’t even have time to reload it. Besides, we both know you haven’t—”  Steele paused at the familiar sound of a ramrod forcing a patched ball down a metallic chamber. “You have a pistol?”

“You really should consider leaving before I’ve finished loading it. Oh, bother…I’ve finished. A smart man would take his leave.”

Steele stepped away from the window in case the dear old bat was mad enough to shoot him.

He ran his hands down his coat. He, too, had a pistol. And, no, he would not be drawing it. He had something even more powerful.

“Stopped by the postmaster on my way to your cottage,” he said conversationally. “Seems to have forgotten to drop off a couple of items. First letter is from a…” He squinted at the spidery script. “Can’t rightly say. ‘Mayer,’ perhaps?”

“My father?” The voice on the other side of the wall sounded tiny and shocked. “What does it say?”

“The second one was franked by the Earl of Carlisle but seems to be from a Miss Grace Halton. Relation of yours, is it?”

“My daughter,” Mrs. Halton breathed, her voice so quiet and so close that Steele could imagine her pressing up against the wall to be closer to the letter. “Read it to me.”

He shoved them back into his coat pocket as noisily as possible. “Let me in, and I will.”

He smiled. “You have no idea.”

Silence reigned for a scant moment before the soft sound of a tumbler indicated the front lock had been disengaged.

The door did not swing open.

Steele strode up and let himself in, just as the first drops of rain began to fall from the sky.

The tiny cottage consisted of very few rooms—all of which were visible from the vantage point of the front door. No candles were lit and no fire burned in the grate, but enough natural light filtered in through the windows to illuminate the musty, but surprisingly clean interior.

The furnishings were shabby and worn, but otherwise spotless. The dishes were clean. The beds were made. The woman aiming a triple-barrel flintlock turnover pistol toward Steele’s midsection was bathed and neat.

And not a day older than Steele himself.

Where his own beard was starting to appear more salt and pepper these days, Mrs. Halton’s long black hair cascaded down her back with nary a hint of gray. Dark eyelashes framed wide green eyes. He swallowed and tried not to stare. She was beautiful. Porcelain skin. Rosy lips.

The lady didn’t look sick. She didn’t even look like the right person.

He narrowed his eyes. “How can you possibly be the mother of a grown woman? Or…acquainted with the Earl of Carlisle?”

“Read me the letter, and perhaps we’ll both find out.” She gestured at him with the pistol. “Better yet, leave my correspondence on the table, and see your way out.”

“Why don’t you put that thing down before you lose a hand? Multi-cylinder pistols have been known to explode rather than eject their ammunition. Yours looks like it’s twenty years old.”

“It is. I bought it after my husband was killed and taught myself to shoot it. Don’t worry, it won’t misfire. I clean it every night.”

The increase in Steele’s heart rate had nothing to do with fear and everything to do with the confident woman in front of him. Owning a gun had made her interesting to him. Being willing to use it had made her even more so. Now that he saw it for himself and realized not only was it three-barreled firepower instead of a lady’s simple muff pistol, but that she also knew how to take care of it…and herself…