Meet the Hero: The Duke of Silkridge 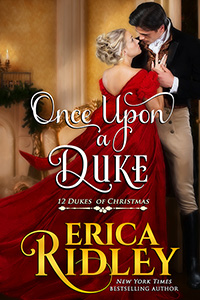 Benjamin Ward, the fifth Duke of Silkridge, didn’t to mingle with the other guests in this godforsaken castle. He wanted a room for the night, he wanted his mother’s locket, and he wanted to be gone.

Before he could have any of these things however, he caught sight of golden blond hair and laughing brown eyes. Just like that, his world tilted on its axis.

She looked both the same and yet somehow even better than before. Soft curves and gold-rimmed spectacles. Happy and smiling and beautiful. Surrounded by a group of equally cheerful friends.

So many years had passed since he’d last seen her. For the longest time, he had expected her to have a Season in the capitol, to take London by storm. Perhaps she had done so, and he had missed it. After all, he spent his days in the House of Lords and his nights in his study.

Perhaps she was now “Lady” or “Mrs.” and no longer the Miss Noelle Pratchett he remembered.

He didn’t want details, he reminded himself. Learning she’d found someone else would serve no purpose, and discovering she was still unwed would not signify. And yet he couldn’t help but gaze at her hungrily as she broke from her friends and made her way to the refreshment table, right in his direction.

The moment she caught sight of him, she pulled up short. All traces of laughter disappeared from her eyes. “Silkridge.”

“Miss Pratchett,” he replied, bracing himself for the inevitable correction.

It did not come.

“Five years,” she said instead.

“You look lovely,” he blurted out, and could have kicked himself. She did look lovely. He had not meant to notice, much less give any compliments.

She ignored it. Her lips pursed. “I thought I would never see you again.”

“So did I,” he admitted. He had missed her so much, those first few months.

After that, he had done his best to push her from his mind. One should not dwell upon things one could not have. Such as a rekindled romance.

She crossed her arms beneath her bosom. “No doubt you’re here for the will.”

Ten o’clock on the morrow. He wouldn’t be a single moment late.

“I shall be gone before you know it,” he promised.

“No doubt.” Her smile didn’t reach her eyes. “You were last time, too.”