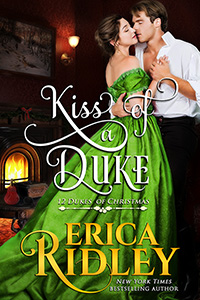 Enjoy an excerpt from the newest Twelve Dukes of Christmas romance,
Kiss of a Duke!

Nicholas hid the flower he’d purchased from the castle greenhouse behind his back and turned up the snow-dusted walk leading to the perfumer’s front door. No matter how hard he tried, life was full of surprises.

Instead of visiting comely ladies of ill repute, today’s target was some bluestocking lady chemist whose naïve oversight had spawned chaos in London’s previously stable social order. The only way to stem the explosion of faux rakelings was to halt production of Duke.

At least the errand should only take a moment. Not because Nicholas expected his reputation to do the work. By all accounts, Miss Mitchell was as awkward and science-obsessed and reclusive as the most fervent of her male counterparts. The lady was unlikely to have heard of him.

In this case, one could not count on so-called sapphire irises or the curve of his smile to sway her. The rose in his hand was just for insurance. Nicholas intended to appeal to her logic. As a natural philosopher, she was no doubt already immersed in some new project. He would encourage her to give up Duke and focus on that instead.

His knock upon the door was answered by neither a maid nor a butler, but the lady chemist herself. Miss Mitchell wore thick leather mitts with strange burn marks, a stiff gray smock dusted in white powder, and a beleaguered expression. “What?”

Nicholas thrust the flower forward out of reflex.

The prevailing wisdom was that roses could dissolve any disagreement between a lady and a gentleman. Because he had never returned for a second day’s company with the same woman, Nicholas had never had to test the theory. He hoped his brother was right.

It did not appear so.

Rather than coo or simper or whatever female reaction single red roses were meant to elicit, Miss Mitchell glanced over her shoulder as if she had left something far more interesting in another room before returning her irritated gaze to Nicholas. “Did you want something?”

What was the best opening gambit?

Her eyes were neither cobalt nor emerald nor turquoise, but brown: a color rarely waxed poetic upon by romantic fools. Clearly, they had never glimpsed Miss Mitchell’s eyes. Hers were not a dull brown, or a forgettable brown, or even a plain, serviceable brown. Not even the brown of coffee or cinnamon or chocolate.

Hers were different from all the other brown eyes Nicholas had ever seen. Deeper. Sharper. More dangerous. These were eyes that did not merely look, but saw. He would need to be careful.

“Forgive me for not waiting for a formal introduction,” he said pleasantly, lifting the perfect rose a little higher so she could not miss it. “My name is—”

Well. That explained the frosty welcome.

“My calling card phrases it a bit differently,” he said, and tried again. “I am Mr. Nicholas Pringle of London, and I am pleased to make your acquaintance.”

“That makes one of us.” She sent another impatient glance over her shoulder. “I’m not interested in you or your services. Is that all?”

“I’m not offering myself to you,” Nicholas stammered. There was nothing to purchase. He wasn’t a cicisbeo. Good God. How had he lost control of what was meant to be an easy conversation? “I was merely hoping for a brief tête-à-tête.”

She arched a brow. “Then why bring a flower?”