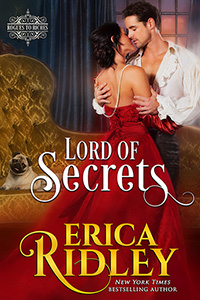 Enjoy an excerpt from the newest Rogues to Riches romance,
Lord of Secrets!

For the first time all Season, Mr. Heath Grenville found himself intrigued.

As the premier scandal-solver of the upper classes, little occurred in London without his awareness. As heir to a title, a graduate of both Eton and Oxford, and a gentleman who regularly put his dancing slippers to good use, Heath was long-acquainted with everyone even peripherally related to the beau monde.

Today, he had been surprised by a stranger.

The beautiful young lady he’d bumped into near the refreshment table possessed a face no gentleman alive could forget. And yet Heath could not place her. Nor could he understand how it had taken all evening to notice her.

With her soft pink gown and lustrous red curls, she more than stood out from the sea of pastel hopefuls. Wide blue eyes, blushing cheeks, lips a perfect, dusty rose…

“Who are you looking for?” his sister asked.

Heath started and forced his attention back to Bryony.

“Nothing,” he said quickly. “No one. Do you want some lemonade?”

“I don’t even want this ratafia.” Bryony sent her cup a baleful glance. “I wish ladies were the ones who retired for port. Have you picked a bride yet?”

“Not yet.” An image of glossy red curls filled his mind.

Heath had not introduced himself because he had been embarrassed he did not already know the young lady’s name. The ton was so insular that new blood was always a ready source of gossip among its members.

A new crop of debutantes? The patronesses of Almack’s would have already decided the girls’ fate before they took their first curtsey. Relatives on holiday or old friends from out of town? The happy occasion would have been boasted about for weeks before the visit even transpired.

His heart thudded. He had not overlooked a wallflower, had he?

In alarm, he swept his horrified gaze about the perimeter of the dance floor.

As elder brother to three sisters, Heath took wallflowers’ enjoyment of public functions very seriously. He had witnessed long ago the mortification that came from staring longingly across a crowded ballroom for six excruciating hours, only to leave with one’s empty dance card hanging limply from one’s wrist.

After he had dried his sister Camellia’s tears, Heath had made it his sworn duty to ensure even the shyest of wallflowers at least bore his name on their dance cards. Not out of pity, but because he assumed every young lady was secretly a force to be reckoned with.

“Have you seen Cam anywhere?” he asked Bryony.

She shook her head. “I think she faked a megrim so she could stay home and practice.”

Probably. Their talented sister Camellia might be quiet in a party environment, but she had the biggest singing voice in all of England.

In fact, all the wallflowers Heath had befriended over the years possessed unique personalities well worth getting to know. If the dandies and young bucks couldn’t be bothered, more fool them. Heath would not make that mistake.

Except he had, had he not? He’d let the red-tressed goddess go without ascertaining her name or securing a spot on her card. And in doing so, he seemed to have lost the intriguing young lady entirely.

“Why aren’t you dancing?” he asked his sister.

“I’m bored with the company,” she answered honestly. “There is only so much one can say about the weather and how lovely the cucumber sandwiches are tonight. I keep hoping to stumble across someone interesting.”

Heath had done precisely that—and then allowed her to slip away. He clenched his jaw.

His set had been promised, and he would never disrespect a waiting woman by failing to promptly present himself for a waltz.

But now that he was free…