Just as the last hint of sunlight slithered past the horizon, the rocky, wind-lashed terrain of Cornwall came into view. Daniel straightened his spine. The chill was already seeping through the cracks in the buffeted carriage.

The driver gulped, his gaze uncertain. “Nightfall has arrived, milord. Shall I find a posting-house?”

Daniel shook his head, his skin tingling from the close proximity to Castle Keyvnor. “No. Let’s keep going. We’re almost there.”

Even as he said the words, the monstrous castle rose from the darkness, its looming towers an even deeper black than the interminable night enshrouding them.

A familiar prickle danced across his clammy skin as the carriage rattled over the ancient bridge across the long-dry moat, and on through a massive iron gate. The castle looked darker than he remembered. Larger. More menacing.

Rebecca was somewhere inside those walls. He just had to find her.

He dashed from the carriage and up the slick stone steps of Castle Keyvnor as torrents of rain spilled from the black, thunderous sky.

The horrendous downpour was not only a fitting welcome back to the castle grounds, but the only weather he ever recalled Castle Keyvnor having. If the sun happened to shine over the sparse seaside village of Bocka Morrow, the castle was still be buffeted by icy winds and cloaked in shadow.

Ignoring the sheet of rain cascading from the brim of his beaver hat, he reached for the brass doorknocker dangling from the maw of a stone lion.

The door swung open before his fingers even touched the knocker. Yet no one presented himself.

Daniel straightened his spine. No sense dallying. Time to head straight into the mouth of the beast.

Morris, the castle’s longtime butler, strode into the entryway just as Daniel slid his soaked top hat from his head.

No point in asking who had opened the door, given that the butler was only now arriving. Castle Keyvnor never had answers. Only a surfeit of questions.

“Lord North-Barrows.” The butler smiled. “Right on time. Your chamber has been readied.”

Daniel didn’t smile back. Nor did he know how he could be right on time, when he hadn’t sent word of his impending arrival because even he hadn’t known for certain when he would arrive.

As the butler divested Daniel of his wet outer garments, a quartet of footmen emerged from a darkened corridor without being summoned and marched outside to the waiting carriage.

Daniel eyed the castle’s dark interior with apprehension. If the servants knew he was coming, why the devil couldn’t they light a sconce or two?

“The footmen will bring your trunks to your chamber shortly.” The butler gestured toward the main stone staircase. “A fire awaits you in the hearth.”

Of course it did.

Daniel inclined his head, eager to dry himself before a fire regardless of how or why its warmth awaited him. But a shimmer of white caught his eye. 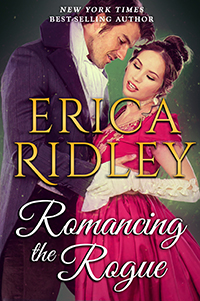 An apparition had appeared at the top of the stairs. No—not an apparition.

Her bone-white gown fluttered from one of the castle’s many drafts, giving her haunting silhouette the blurred edges of a ghost. From this distance, the features of her pale face were smudged by shadow. The glossy dark curls he recalled so fondly were invisible against the yawning blackness of the unlit upstairs corridor. His entire body was on edge.

Nervous, he smiled up at her.

There was no way to know if she returned his smile.

He doubted it. The last time he’d seen her at Castle Keyvnor, he’d cruelly rejected her in front of witnesses. And the last time she’d been in London…he hadn’t spoken to her at all.

His chest tightened. He was lucky she hadn’t come to the landing solely to toss water upon his head.

Perhaps she was saving that for later.

“Rebecca?” Because the soaring stairwell had no balustrade, Daniel placed his damp palm against the cold stone wall for balance. The last thing he needed was for wet soles to send him sliding to his death before he could even make his grand apology.

“I know,” Daniel called back as he hurried up the rest of the stairs. “Rebecca, it’s me. Daniel.”

“I know,” she echoed as he rounded the final step. Her eyes were dark and luminous in the pale porcelain of her face. “Good evening, Lord North-Barrows. I trust Morris has seen to your luggage.”

Ah. So he had lost first-naming privileges. And was to be treated with the same distant politesse one might use to welcome a stranger.

He deserved that and more.

“Please,” he said. “You must still call me Daniel. I know I was awful to you, and you have every right to be vexed with me. I admit it. I behaved abominably and am here to apologize. I was foolish and wrong.”

“Were you?” Her expressionless dark eyes gazed right through him. “I’m sure I don’t recall.”

His muscles tightened. Of course she recalled. She had the cleverest mind of anyone he’d ever met. But by pretending she couldn’t remember his crimes, she didn’t have to forgive him. Or acknowledge his heartfelt apology. He forced his fingers to unclench.

Despite the murky shadows of the ill-lit corridor, she was even more beautiful than last he’d seen her. He drank her in. She had been the prettiest of that year’s crop of debutantes during her come-out five years ago, but now she was ravishing.

Girlish cheeks had turned into high cheekbones. A willowy frame had become womanly curves. Her innocence had been replaced by mysteriousness. He didn’t know this Rebecca Bond any longer. But oh, how he wanted to. If only they could erase the past.

He yearned to reach for her. Once, she would have welcomed his touch, his embrace.

Tonight, she was just as likely to push him off of the landing.