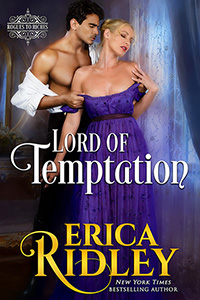 Hawk made his way from the center of the salon to the dais where Faith stood rooted with bright pink cheeks. Heart racing, he lifted an outstretched hand and held his breath.

Faith’s indecision was palpable. So were the thumping feet of the rowdy students, the fairylike sparkles of the mirrored candles, the intoxicating sweetness of the violin’s melody.

Just as he started to lower his hand, she lifted hers.

His breath caught. Faith’s eyes were not full of forgiveness but resignation. Yet it was more than he had hoped for. More than he deserved. It was a start.

He helped her down from the dais and placed his other hand about her waist.

The last time he had touched her, she’d had thin, coltish limbs and worn debutante pastels. Now, she was nothing but soft, womanly curves. Even more perfect than last he’d seen her.

Even more perfect than last they touched.