New Release: ONE NIGHT WITH A DUKE 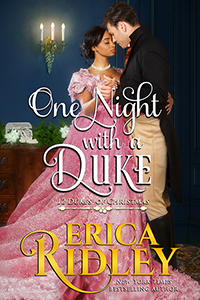 From a New York Times bestselling author: Sparks fly in this definitely-not-falling-in-love workplace romance between a handsome drifter chasing adventure, and a small-town jeweler who would never leave her home behind…

Dashing Scot Jonathan MacLean never returns to the same town twice. The happy-go-lucky philanthropist seeks constant adventure… and is desperate to outrun his past. When a blizzard traps him in a tiny mountaintop village, he meets a woman who tempts him with dreams he'd long since abandoned: Home. Community. Love. But other people’s livelihoods depend on him leaving for good as soon as the snow melts.

Talented jeweler Angelica Parker has spent her life fighting for recognition. She's Black, she's a woman, and she will prove her creations are the equal to any artisan in England. With a contract anchoring her in place for seven years, she lands the project of a lifetime. There's no room for error—or distractions. Such as the charming drifter whose warm embrace and melting kisses have become more precious than jewels…