New Release: DAWN WITH A DUKE 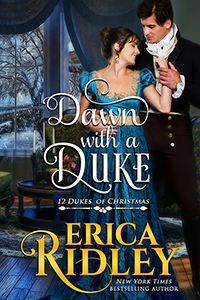 From a New York Times bestselling author: Secrets and scandal abound when two strong-willed opposites are snowbound together in this laugh-out-loud, heartwarming romance!

As the daughter of a duke, Lady Isabelle’s pristine reputation is paramount. Her high status is how she’ll attract the titled suitor her mother insists she wed. When Belle’s chaperone falls ill en route to a party, she must pose as an independent widow to avoid gossip. Why not have a wee innocent flirtation with a handsome tailor staying at the same inn? She’ll be gone in the morning…

A sudden blizzard upends Calvin MacAlistair’s plans when he’s snowbound at a posting-house. He has no time to play lady’s maid to the helpless beauty next door, no matter how much he enjoys unbuttoning the straitlaced widow. His future depends on impressing an important investor… who will ruin them both once they realize Calvin has spent a scandalous fortnight with Lady Isabelle!