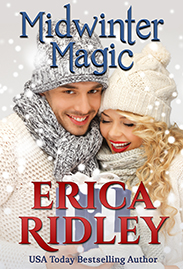 MIDWINTER MAGIC | Read an Excerpt! | Win it on GoodReads!

After an eye-opening congressional hearing, former corporate shark Jack Morgan redirects his ill-gotten gains toward charity work. However, his attempts to bring holiday cheer to a Bolivian village meet with one disaster after another: canceled flights, crumbling luggage, implacable customs officials. His plans disintegrate further when he runs into a sexy tourist with . . . wings?

As Jack’s guardian angel, Sarah Phimm has her work cut out for her. When his latest volunteer mission risks his life, she’s forced to reveal herself to him—but only in part. She can’t risk him knowing the truth. He’s everything her immortal heart desires, but can never have. She soon discovers that keeping him safe amidst death bridges and tumbling telephone poles is far easier than guarding her heart.