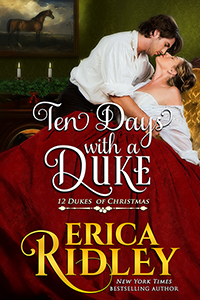 Enjoy an excerpt from the newest 12 Dukes of Christmas romance,
Ten Days with a Duke!

Mr. Elijah Weston checked the urge to reach out to block the door, lest Olive Harper slam it in his face.

He valued his fingers too much to take that risk.

Eli didn’t blame her for mistrusting him. He deserved every bit of her anger and resentment. He’d hurt her. His presence was hurting her again. Of course she was wary. But soon, they would be on a new path to a better future.

Her hair was still a gorgeous light brown, the golden bronze of bupleurum longifolium. Her eyes, the deep brown of rich soil, earthy and resilient. She was tall; almost as tall as him, just as she’d been a decade ago, when he last saw her.

Unlike that day, Miss Harper was not wearing a worn riding habit, but rather a gorgeous moss-colored gown of silk and satin. Her cheekbones were sharper, her curves fuller, her spine straighter.

She absolutely looked like the goddess of the forest she was rumored to be: wild, ruthless, capable of bending any beast to her will.

Her power and barely restrained fury should have spooked him. Sent him galloping off before she had him by the reins. Instead, it was all Eli could do not to reach out and touch her. To prove to himself she was real.

Had he been afraid reality would fall well short of the image he’d built up in his mind? She was so much bigger, so much better, than dreams could conjure.

Visibly restraining herself from slamming the door into his nose, Miss Harper clenched her jaw and flung about to face her father.

Only a fool or an immortal would give an enemy her back.

Miss Harper was no fool.

Now that she was no longer looking at him, the unbearable cold seeped beneath all of Eli’s warm layers to burrow deep into his bones. Clouds of snow pillowed into the air as the bitter wind blustered down the lonely, empty street.

All Eli knew of this area was that the village was called Christmas, and today was its busiest day of the year.

If that was true, all of the tourists must already be indoors, making merry before a warm fire. No one else was standing on a frozen doorstep, gloved hands jammed into wool pockets, shifting from foot to foot in a fruitless, desperate attempt to keep the blood moving in his veins.

Eli had never been north of London. He’d seen paintings of this picturesque, mountain-top village. Majestic Marlowe Castle at the peak, the rows of bright red sleighs pulled by coal black horses. It looked positively enchanting.

It had enchanted the feeling right out of his toes.

Not that anything was colder than the reception he was getting from Miss Harper.

Clearly, her father had broken the news of their betrothal. Just as clear was her opinion on the matter.

That she hadn’t forgiven him was obvious. How could she have? His actions were unforgivable. For as long as he lived, Eli doubted he would forgive himself. The pain on her face, both then and now, would forever haunt him.

How he wished they hadn’t had to meet like this!

Eli had dreamt of a reunion a thousand times. Of apologizing for the past, of finding some way to make up for his crimes against her. To start again. Perhaps, even, to have a future.

On their own. Without either of their fathers looking on.

But it was not to be.

Theirs was not a love match. He did not blame her for feeling betrayed by her father. Eli felt the same. He would not be here, ruining Miss Harper’s Christmas, if this reunion weren’t at the marquess’s insistence.

Like all men, Eli was many things. Some he was proud of, some not. But doing the right thing came first, whatever the cost.

Even if it meant obeying his father.

Inside the warm house, Miss Harper’s father gave an exaggerated shiver, and jabbed an emphatic finger in Eli’s direction.

With eyes that could smelt iron, Miss Harper took an extravagant step to one side, unblocking the doorway with an unwelcoming sweep of her arm.

Eli crossed the threshold on limbs that had long since gone numb.

She closed the door behind him and leapt lightly away, as if preparing for him to pounce.

“I know this isn’t what you want,” he said. “I will do everything in my power to treat you like a man in love.”

“Pfft.” The snort of laughter did not reach her eyes. “You’d stab me in the heart just to see if I bleed.”

With that, she turned her back and resumed arguing with her father as though Eli weren’t standing there dripping globs of melted snow in her hallway.

He could not tell what they were saying. Miss Harper’s father was deaf and did not speak. Miss Harper responded to him with sign language in silence. Their hands moved so quickly, their fingers were a pale blur.

But one needn’t understand all their gestures to get the gist.

Eli’s heart clenched. He hated that he was hurting her all over again. At least the shock would be over soon enough, and then they could put the ugliness behind them.

Miss Harper’s arms did not stop flying, but she began to speak the words aloud too.

“—unnecessary and unfair,” she apparently motioned. “He’s heir to an even bigger stud farm in the City. He deals with Tattersall’s on a regular basis and is the supplier of choice to London’s elite. He doesn’t need our farm.”

Her father signed his reply.

When Miss Harper glared back at him stonily, he began the gestures anew, larger and more forcefully.

“‘But then you’ll have two, which means both of you benefit,’” she interpreted, and shook her head. “No. Then he’ll have two. Neither will be mine.”

Eli shifted uncomfortably. He moved slightly to see both their faces and hands.

Her father was using signs again. “Keeping grudges leads to an early grave. This will heal the rift. Milbotham and I will see our offspring married before we die.”

“Neither you nor the marquess are at death’s door,” she shot back, once she’d repeated his comment aloud to Eli. “You’ve decades of life left. Can we discuss this when I’m fifty-four instead of twenty-four?”

“It will happen this week.” Mr. Harper turned toward Eli. “Did you bring it?”

“Bring what?” Miss Harper signed. Her voice strained with trepidation when she repeated the words verbally.

Eli nodded in assent to her father. He pulled the wet leather glove free from his numb right hand, and reached beneath the lapel of his coat to the warm, dry pocket hidden within. Slowly, he pulled out the folded square of parchment.

“Yes.” His voice sounded calm. Nary a crack. “I brought the license.”

Miss Harper looked like a sail in high wind. Pale and tattered and struggling to hold on. “A marriage license?”

Eli knew how unfair this was. The saving grace was that it would be over by tomorrow. Her father would say, you must do this, and she would acquiesce, even though she didn’t wish to, because children were obedient to their parents. Especially daughters, who had neither choice nor recourse.

It was not what Eli would have wished for her or for anyone. But here they were.

“No,” she stammered, her finger movements disjointed. “Absolutely not.”

“Take him to Nottingvale’s for this evening’s dance,” Mr. Harper suggested. “The duke will toast your betrothal as cheerfully as his sister’s.”

Her signs were as sharp as her voice. “Hell will freeze over before I introduce this knave to my friends as though he numbered among them.”

Eli returned the license to the safety of his pocket. “I will do whatever it takes—”

“Oh?” Her tight-lipped smile turned calculating. “Then win me.”

“If both of you want this betrothal to happen, then Weston must earn my acceptance.” She turned a mulish look to her father as she signed. “You cannot consign me to less.”

Of course he could. Mr. Harper was her father.

To Eli’s shock and horror, Mr. Harper lifted a shoulder as though this last-minute complication didn’t matter in the least. “Very well. Nottingvale’s Twelfth Night party will do just as nicely for announcing your betrothal.”

“I expect an effort of good faith while pursuing your suit,” Mr. Harper countered calmly. “You must spend every waking hour together between now and then.”

“But Father! Ten days with a rogue will ruin my reputation and no other gentleman will have me.”

“Then I suppose you ought to marry me and have done,” Eli said.

She slashed him with a sharp gaze as she interpreted. “That was sarcasm, Mr. Weston. You’re no gentleman. I have no suitors because I don’t want any.” She turned those cutting eyes to her father. “I’ll consider his suit in ten days’ time, on one condition.”

“What do you want?” he signed.

“I’ve no reason to trust this churl. And there’s only one creature whose trust is even harder to earn than mine.” A smirk flirted with the edges of her lips. “I’ll consider Mr. Weston’s proposal if he manages to convince Duke to let him ride him.”

Eli’s lungs froze. His blood raced with panic. This was a preposterous stipulation. An impossible stipulation. A ten-day courtship was farce enough. Eli wasn’t going anywhere near her stables.

“No changing the agreement,” he said to Mr. Harper. Miss Harper’s hands moved with speed, interpreting after Eli spoke. “According to my father—”

Miss Harper spun to Eli, her eyes fierce. “I don’t give a fig what your father said, Mr. Weston. My father said Twelfth Night, and that’s the best offer you’re going to get. Take it or leave now.”

Eli tried to think fast. It was impossible with the blood rushing in his ears and all his carefully laid plans disintegrating like snowflakes before a fire. Delaying the betrothal was the last thing he wanted to do. It would only draw out the torture for both of them.

But if this was the only path forward, he had no choice but to take it.

“As you please,” he growled, then adjusted his tone. She was not the enemy. “If those are your wishes, it will be my pleasure to fulfill them.”

She’d turned the tables on him.

He had ten days to win the affection of a duke.